Slower global growth and easier monetary policy – what is the upshot for emerging markets?

Slower global growth and easier monetary policy – what is the upshot for emerging markets?

Global growth has been slowing since the beginning of 2018 – but turn the clock back to 2017 and the world economy was in great shape. Growth was above-trend and synchronised across most parts of the world, while global indicators were at cyclical highs. When data began to soften in early 2018, many analysts initially saw this as reversion to trend growth. But US-China trade tensions intensified in the spring of 2018 and the global economy has been disappointing ever since, as implied by the Citi Economic Surprise Index (Figure 1). This is one of the longest stretches of negative surprises in the series’ history. Policy uncertainty is also running high (Figure 2). 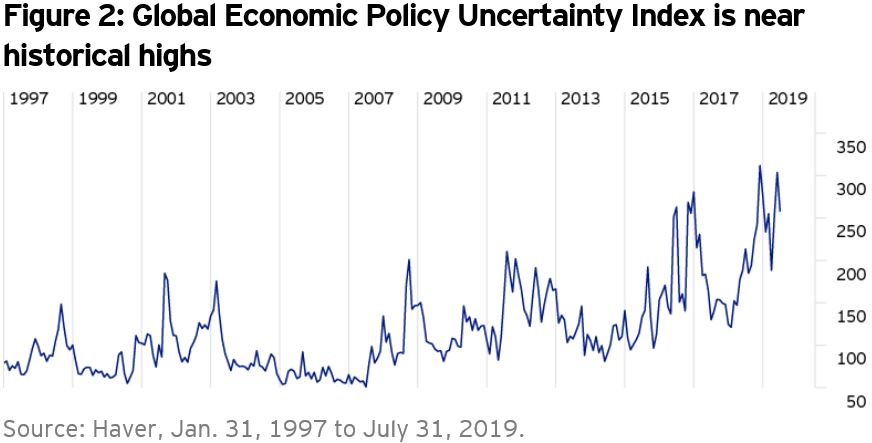 The global trading order that was decades in the making, and forged under the strong influence of the US, is now being challenged. The current environment makes it difficult for companies to make long-term investments such as building factories or buying expensive machinery as the rules of the are changing. Data show the impact of this uncertainty. Global manufacturing, trade and investment, all highly correlated and drivers of global business cycles, have been in a downtrend since the first half of 2018. Forward looking sentiment and hard data suggest that this downtrend will likely continue for some time.

Despite weakness in the manufacturing-trade-investment nexus, the global economy has been resilient so far. Global growth has slowed from above-trend to slightly below-trend but is not in recession. We expect this resilience to continue, while noting that risks are to the downside. In major developed markets, decades low unemployment rates, strong private sector balance sheets and resilient consumer confidence are supporting domestic demand.

The policy response to waning economic conditions has limited the downside risks, in our view. There has been a sea change in economic policy over the past three quarters. As of the end of 2018, the Fed was still tightening policy and signaling more, while the ECB was done with its quantitative easing (QE) programme and markets were beginning to price in a hiking cycle. Fast forward to today and the Fed is easing for the first time in a decade and the ECB is widely expected to ease in September, potentially cutting rates for the first time in three years and re-launching its QE program. When the Fed opened the door to easing, many central banks followed suit and more is likely to come.

While there is some skepticism about the effectiveness of these policies, monetary policy has supported the global expansion until now. Time and again central banks have stabilised markets and stimulated economies successfully since the global financial crisis. Monetary policies cannot always offset major shocks, such as a full-fledged trade war, but we are not there, in our opinion. What is needed at this stage is the stabilisation of sentiment and an orderly adjustment to the trade shock and uncertainty that are dampening the world economy. Monetary policy is the first line of defense. We believe central banks will act decisively, and probably more aggressively, than what is expected by markets, until we see signs of a recovery in the global economy.

We also believe that fiscal policy will be used more pragmatically in the coming quarters, especially in countries where there is fiscal space. In the eurozone, there is already modest fiscal stimulus in place, providing some downside insurance, and Germany is reportedly preparing a fiscal stimulus package in case the economy weakens further. Granted, eurozone fiscal policies are not aggressive or pro-active at this stage, but still they provide some downside insurance. China is using fiscal policy more proactively this year, in addition to its traditional monetary and credit easing policies.

Emerging markets: exposed but with buffers

How will the emerging economies fare in this changing world? They have weathered the turbulence quite well so far. Emerging markets growth has slowed compared to expectations, but in only a few cases have there been sharp slowdowns or recessions. Compared to the past, most emerging economies now have stronger macroeconomic balances. After the taper tantrum of 2013, the commodity price collapse of 2014-2015 and last year’s sell-off, emerging economies have undergone significant economic adjustments. Current account and fiscal balances have improved, and monetary policies have tightened, all providing buffers against the current downturn. Meanwhile inflation, an old foe of emerging markets, is generally low in most emerging economies, with a few exceptions.

This environment suggests there is room for monetary stimulus in emerging markets. The mix of relatively high interest rates, low inflation, and improved macroeconomic balances mean that emerging markets have room to cut interest rates, providing potential opportunities in local rates markets. The large and growing stock of negative yielding bonds in advanced economies also makes emerging market yields attractive on a relative basis. In this environment, we find investing in local rates attractive in several countries, while being cautious on the currency side. In this space we like India, Indonesia and Brazil. We remain underweight Turkey as underlying inflation remains high and persistent, and the fiscal balance is deteriorating.

In currency markets, we believe value is emerging after recent sell-offs, but we see better opportunities in relative value trades until there are visible signs of stabilization in the global policy and economic outlook. As we expect aggressive policy easing from the ECB, we favour euro-funded positions on a selective basis.

In this space we favour the ruble, given its strong external and fiscal balances, low funding needs and attractive carry.

While we see opportunities in local markets, we are watching the global economy closely, since growth risks are still to the downside. Our baseline expectation is for below-trend global growth in the coming quarters, but not a global recession or sharp slowdown. We are watching a range of leading indicators to continuously assess these risks to our baseline view. We are monitoring global manufacturing, trade and shipment data for signs of stabilization in those sectors. We also continuously assess whether domestically oriented sectors are resilient to trade jitters by monitoring service sectors, consumer confidence surveys, retail sales and residential construction.

The opinions referenced above are as of  September 10, 2019. These comments should not be construed as recommendations, but as an illustration of broader themes. Forward-looking statements are not guarantees of future results. They involve risks, uncertainties and assumptions; there can be no assurance that actual results will not differ materially from expectations.

Fixed-income investments are subject to credit risk of the issuer and the effects of changing interest rates. Interest rate risk refers to the risk that bond prices generally fall as interest rates rise and vice versa. An issuer may be unable to meet interest and/or principal payments, thereby causing its instruments to decrease in value and lowering the issuer’s credit rating.