China is responsible for the vast majority of EM debt growth, and it is on stable footing.

In January, we published a blog that discussed our optimism about EM equities following a volatile 2018. In that blog, we tackled a few contemporary controversies in emerging markets, including China’s growth deceleration, the broad-based strength of the U.S. dollar, and the perceived structural fragilities in EM. Here, we focus on an oft-cited, but misguided, reason for those perceived fragilities: the build-up of leverage and indebtedness in EM over the past decade.

The popular belief that emerging markets are generally more susceptible to market volatility due to higher leverage is unjustified. There is only one notable story of massive “levering up” in the EM landscape, and that is centered in China. Given China’s significance in the emerging world, it tends to obfuscate everything when it comes to generalizations related to EM, including generalizations about EM debt. China saw a massive 120% increase in its debt level (from 161% to 281%) in the last decade. The rest of EM observed a moderate debt increase of 29%, smaller than the 31% increase in developed markets. Exhibit 1. 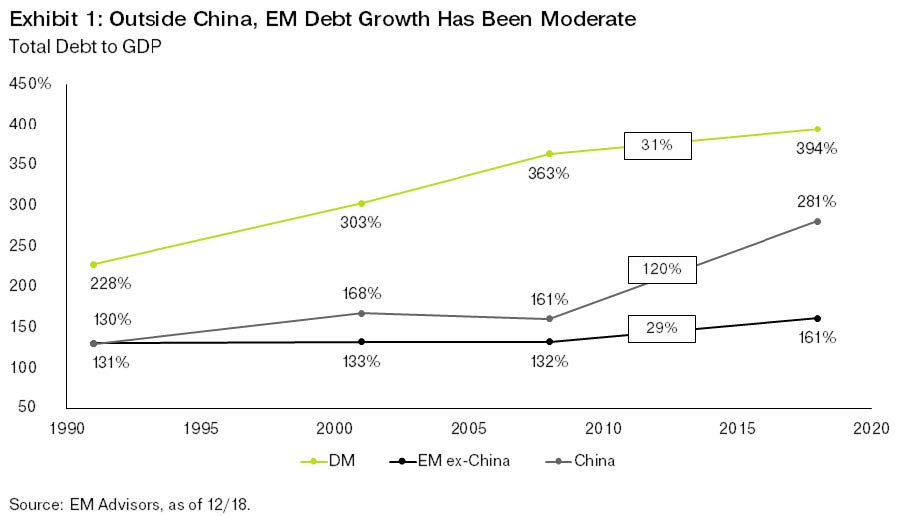 From a historical perspective, overall debt levels in the developed world rose frenetically between 1990 and 2010, but have gone relatively flat in the aftermath of the financial crisis. In EM, the opposite is true. EM aggregate debt levels as a share of GDP were largely stable in the 1990s and the 2000s, but since the crisis, cumulative debt in EM has surged by roughly 50 percentage points of GDP, from relatively low levels1.

While this type of ramp up in leverage makes it easy to draw analogs to historical debt crises in EM, the vast majority of EM economies remain extraordinarily resilient, thanks to their modest external borrowings, healthy current accounts and reasonable fiscal balances. In fact, many of these markets have positive current accounts, and none of them have current account deficits exceeding 5% today. One major exception is Turkey, which, with an unusually large current account deficit, has more non-financial private sector borrowing in a foreign currency than any other major EM country. Exhibit 2. Furthermore, reliance on foreign funding remains relatively moderate across major EM economies. Exhibit 3. 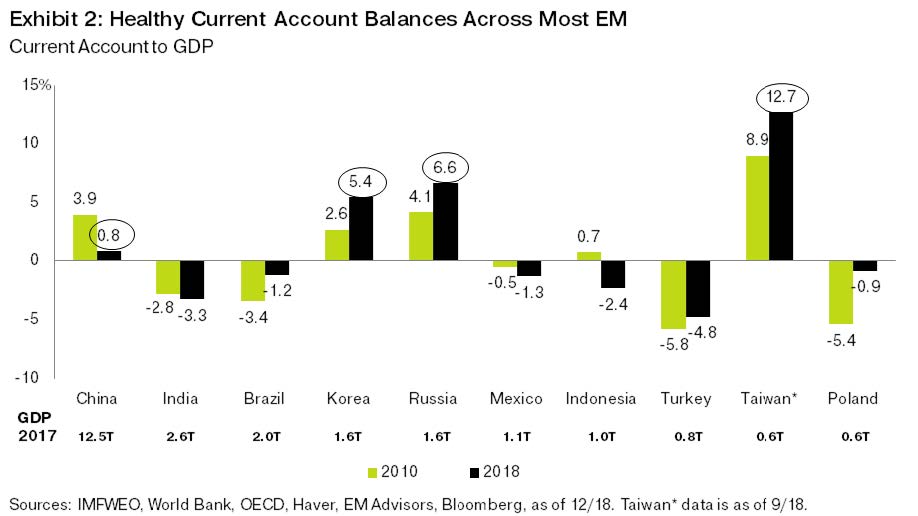 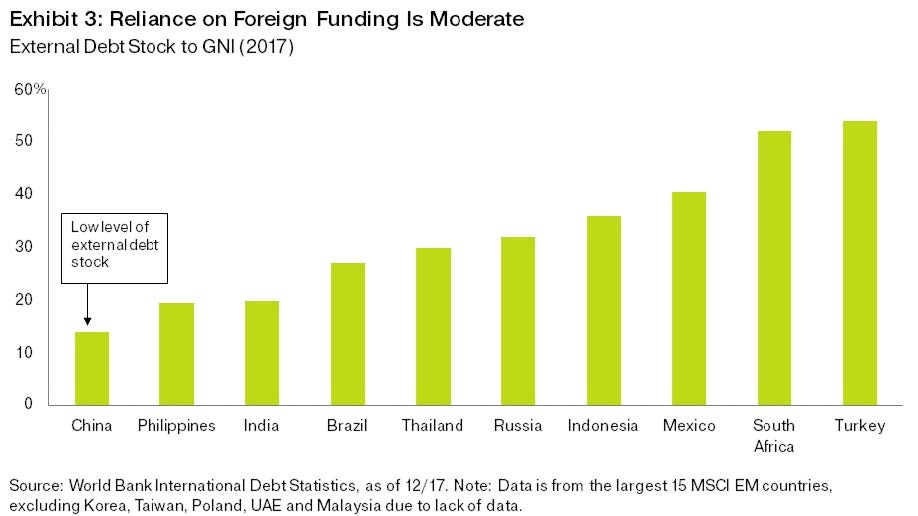 Fiscal balances have largely been improving and are contained across EM. Exhibit 4. The only notable exceptions are Brazil and India, but even in these countries, large deficits are being tackled. India saw remarkable improvements in consolidated fiscal balance between 2010 and 2018, and Brazil swore in a new president in October 2018 who has vowed to tackle fiscal issues in the country, starting with pension reform. These countries have been the major beneficiaries of an environment of unconventional global monetary policy and, not surprisingly, are also the ones suffering the most as the tide recedes.

Other than these fragile circumstances, it is fair to say that most EM economies are in good shape to weather potential debt-related pressures. 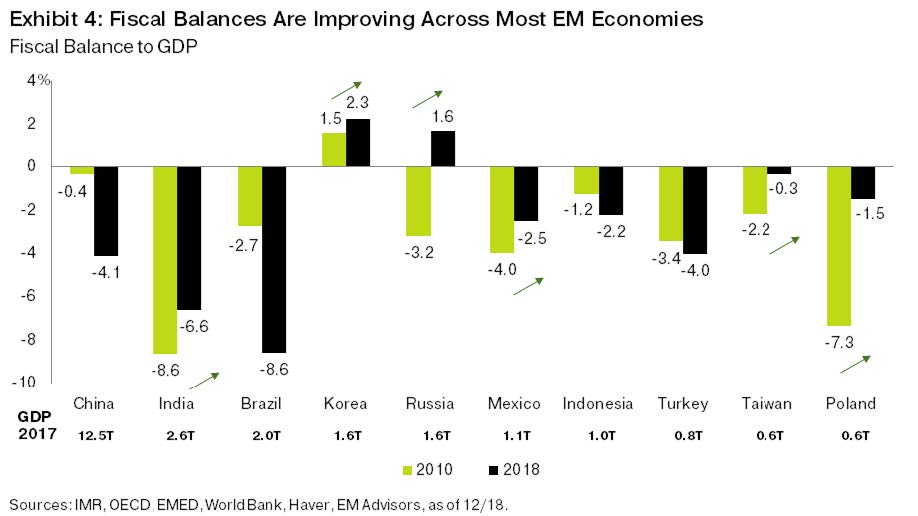 Why China leverage does not concern us

China’s large, sustained run-up in debt as a share of GDP has left many concerned about the after effects of its leverage boom. From its initial fiscal stimulus associated with the global financial crisis to today, China’s debt-to-GDP ratio has surged by more than 100%. Undoubtedly there will be asset impairments, and slower credit growth should be expected in the long term as the country deleverages. This has manifested recently in the record-high pace of corporate debt defaults in 2018, and the sweeping rules introduced to tackle China’s shadow banking system. While the country faces longer-term, debt-induced credit risks and a potential slowdown in growth, we believe China is on steady footing, and remain sanguine about their capacity to manage their leverage for multiple reasons.

At 46% of GDP, China’s domestic saving rate in 2017 was nearly two and a half times the U.S. rate of 19%. Although the rate has been declining since its 2010 peak of 50%, it is still twice the EM average. Exhibit 5. With ample savings, companies and local governments can essentially mitigate their debt as the economy supports borrowers and creates inflation, which erodes the debt repayment pressure. 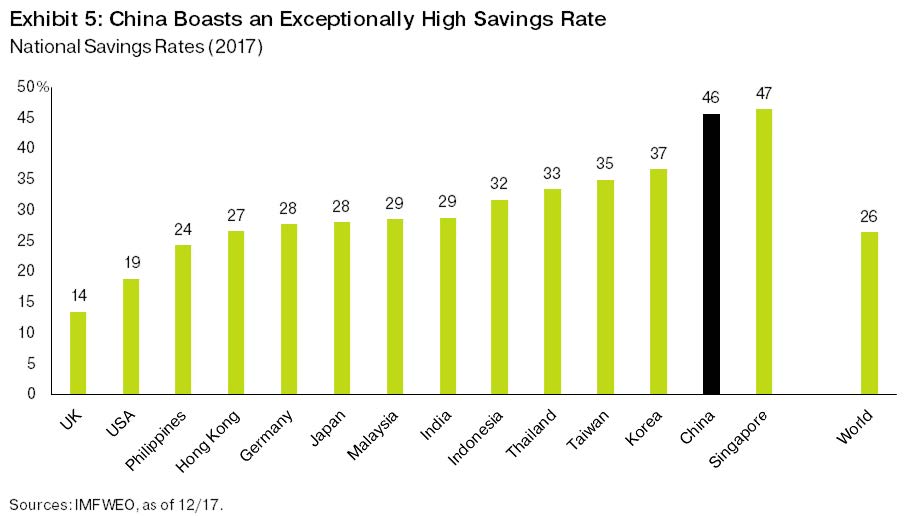 2. China has low to no reliance on external borrowing.

It is worth mentioning that China’s foreign exchange reserve alone can cover all of its external debt, and more. Exhibit 6. 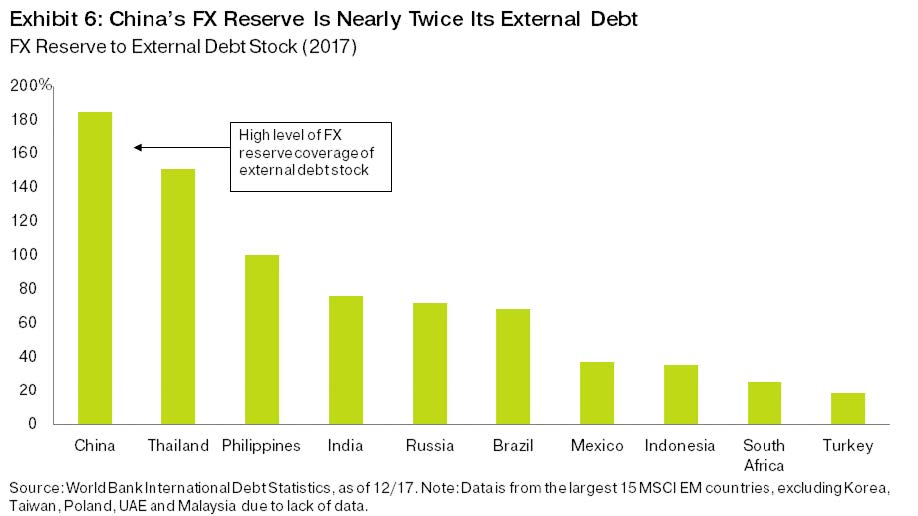 3. China’s fiscal capacity is unlike any other nation on earth.

When it comes to taking fiscal measures such as bank recapitalization or introducing a prudential regulatory regime, China has the best public balance sheet in the world to deal with high-leverage circumstances. Inherently, China’s balance sheet health is blessed with low levels of fiscal debt.It is almost immune to domestic balance sheet recession like Japan in the 1990s and the United States in 2008, when central banks struggled to stimulate demand as highly levered firms and households paid down debts.

4. The government has unparalleled assets (land and stocks) on the balance sheet to cover its liabilities.

According to Merrill Lynch’s estimates, the Chinese government’s stake in state-owned enterprises (SOEs) had a book value of over US$9 trillion as of December 2018. The government could privatize these assets if necessary to fund stimuli through measures including implementing lower reserve requirements and consumption-boosting tax cuts. 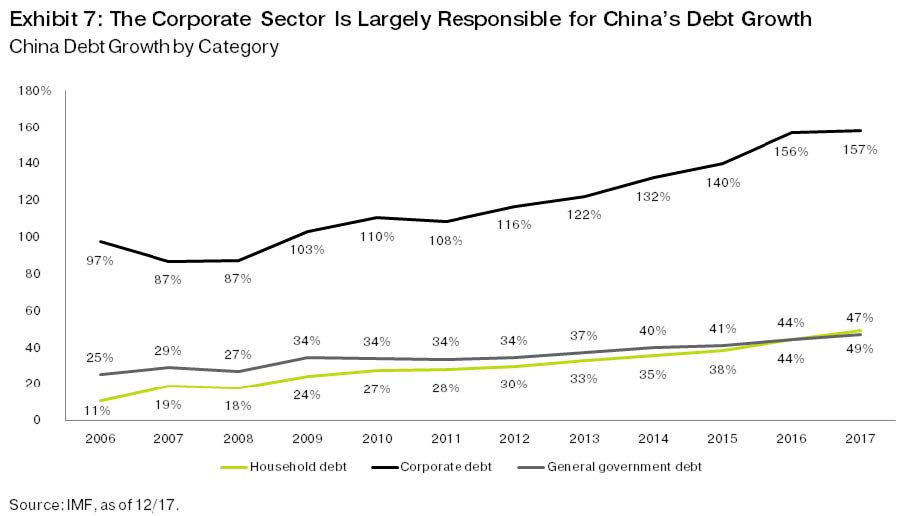 One of the misconceptions underlying concerns about China’s debt fragility is that debt resides at the federal government level. In fact, growth in debt has been consistently concentrated in China’s corporate sector. Exhibit 7. Granted, many of these corporates areassociated with the state in some form. However, the government has been curbing loans to bloated SOEs. Exhibit 8. Even the biggest private conglomerates have been restrained from continuing with their debtfueled acquisition sprees. 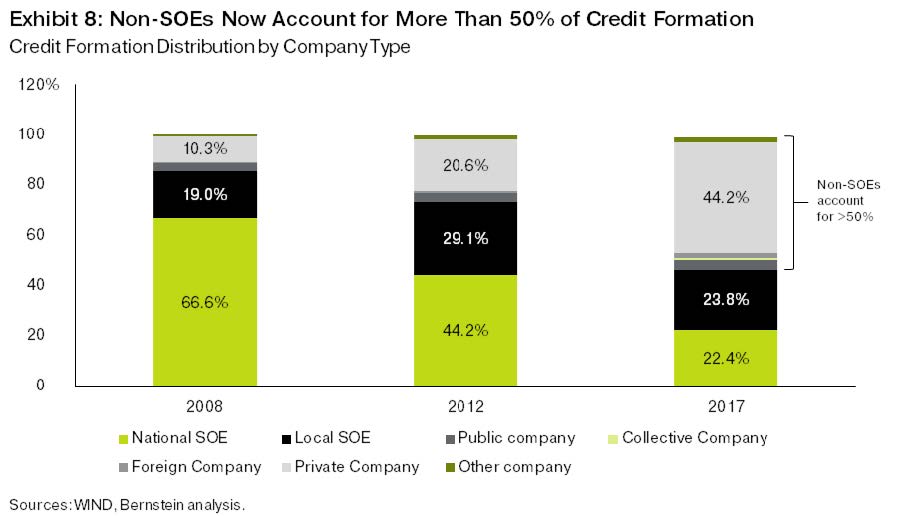 Another area of growth has been at the local government level. This has been a legacy issue for China, as local governments enjoy a large degree of autonomy and have historically accumulated high levels of indebtedness. Consequentially, this has led local governments to borrow from local SOEs and affiliated private companies to shore up their accounts. Here too, the federal government has taken steps to rein in the problem, through surgical measures including cutting excess capacities in troubled industries such as steel and coal.

The rapid rise of household debt in the last few years is not particularly disturbing to us.China’s household credit has been suppressed until recently, as private households only obtained access to bank loans in 2003. A steep increase in real estate prices has stimulated demand for mortgages which, along with the rapid rise of online consumer lending, have jointly contributed to much of the rise of household debt. In general, however, the value of mortgages in China remains under control, especially compared with mortgages in the developed world. Exhibit 9. 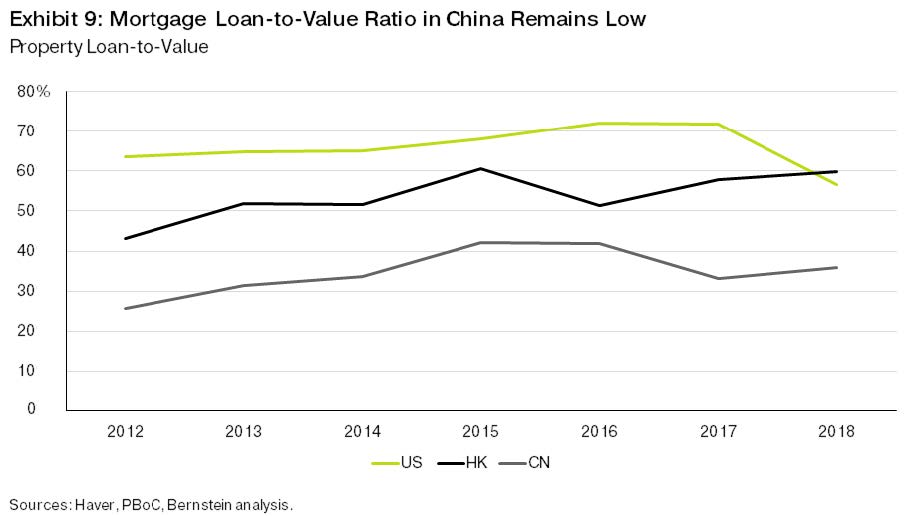 While last year’s debt crises in Argentina and Turkey cast doubt on the sustainability of EM leverage, it would be a mistake to draw the conclusion that there are widespread structural fragilities in the system. The increase in the EM debt level in the last decade was almost entirely driven by China as a result of the country’s sheer size and growth pace. Outside of China, there are no systemic concerns about debt levels, current accounts, external borrowing, or fiscal balances.

Inevitably, China’s growth will slip due to trade-related external challenges, slower credit growth, the country’s focus on deleveraging, and its more cautious stance on local government spending. However, the country is well-equipped to tackle any leverage concerns, thanks to its massive savings and fiscal capacity. Remember, China is a net creditor with the largest FX reserve in the world and has the wherewithal to resolve any debt issues internally and gradually.

We continue to believe that this environment of heightened market tension associated with macro uncertainties favors those with an idiosyncratic approach rather than momentum or passive strategies. It creates opportunities for skilled active managers to unearth extraordinary companies with structural growth drivers, durable competitive advantages, and real options that manifest overtime.

Justin Leverenz is Director of Emerging Market Equities and Portfolio Manager at Invesco. This article was first published on March 1, 2019.